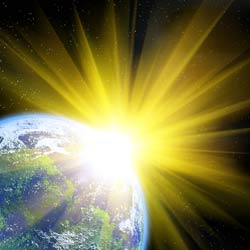 One of the greatest tasks humanity has faced throughout history is the establishment of peace and unity among differing and diverse peoples. Superficial, external and cultural distinctions such as gender, race, ethnic origin, nationality, religion and so forth have long divided humanity and been the cause of much warfare and social turmoil. It is only in the last 100 or so years that humans have seriously begun to explore worldwide our points of unity and begun to overcome the barriers which have separated humanity.

Central to this evolutionary process has been the dynamic of at once accepting and celebrating diversity while simultaneously seeing the fundamental oneness which all humans share. This dynamic of unity â€” seeing with the eye of oneness â€” is the essential foundation for lasting world peace and prosperity, and will be the motivating principle of the next millennium. The long and painful process of overcoming prejudice and embracing humanity’s essential oneness, while by no means yet complete, has brought us to the dawn of a true world-encircling community of one people. The recognition that mankind is one, that race, nationality, gender, religion and so on are secondary to our shared humanness, may well be the crowning achievement of the 20th century.

But what does it mean to be human, essentially human, apart from a purely biological definition? Our deepest point of unity transcends race, culture, gender, profession, life roles, even level of intelligence or emotional make- up, since all these attributes vary widely among people. Rather, the foundation of human oneness is consciousness itself, the ability to be conscious, self-aware, intelligent sentient beings. All other human qualities arise from this mother of all attributes. Conscious intelligence is the root essence from which all other human qualities emanate.

It is the universal and fundamentally pure canvas on which the dazzling array of human life manifests. The firmest, most enduring and transcendent foundation on which human unity is based then, is consciousness itself, for we are all sentient beings, conscious, self-aware, and intelligent. No matter how diverse two people or two cultures may be, this foundation of consciousness will enable unity to prevail, as it is the simplest yet most profound common ground which all humans share.

As great as the challenges to unity have been and continue to be for humans, how much greater might this be for the emerging and embryonic relationship between humans and extraterrestrial civilizations. The superficial and cultural differences between, say, an American and a Kenyan tribesman may pale before it! If disunity and conflict arise when we look only to the differences between humans, how much greater will the potential disunity and conflict be if we are able only to focus on the points of difference between humans and extraterrestrial beings. The failed and disastrous ways of the past-of seeing only differences and foreign qualities-must give way to a new way of seeing, of seeing with the eye of oneness.

This eye of oneness must be directed not only towards our fellow humans, but towards extraterrestrial people as well, for the same fundamental basis for unity which exists among humans also exists for the relationship between humans and extraterrestrials.

The term extraterrestrial Intelligence (ETI), so curiously nondescript, wonderfully lends itself to these concepts of unity. Regardless of planet, star system or galaxy of origin, and no matter how diverse, ETIs are, essentially, intelligent, conscious, sentient beings. Humans are essentially intelligent, conscious, sentient beings. We are, essentially, one. On this basis, we may speak of one people inhabiting one universe, just as we now envision one people as children of one planet. Differences are always a matter of degree, but true unity established in consciousness is absolute.

The beings currently visiting earth from other planets, while no doubt different from humans in both superficial and more profound ways, are nevertheless conscious intelligent beings. Consciousness is the basis for both human and extraterrestrial existence and is therefore the foundation for unity and communication between the various people of the universe. Beliefs may vary, biological processes may vary, assorted capacities may vary, social systems and technology may gary-but the simple thread of conscious intelligence which runs through all peoples elegantly weaves our unity. This essential unity is not subject to the trials of diversity, for it is pure, immutable and fundamental to the existence of intelligent life itself.

The challenges of establishing unity among the peoples of the universe is a grand extension of the challenge of establishing unity and peace among the people of the earth. Diversity, distinction and differences must be met with mutual respect, acceptance and even celebration, while the deeper foundations of unity are held steadily in view. The eye of oneness does not exclude or reject the diversity among peoples, but relates this diversity to a paradigm of universality based in consciousness. The development of this capacity, of this kind of awareness, is the most important pre-requisite for not only peace and unity among humans, but also for the peace and unity between humans and other intelligent life in the universe. We must hope and pray that the errors and shortcomings humanity has manifested in its long and, as yet, incomplete march to world unity will serve as well-remembered lessons as we face the task of peacefully interacting with extraterrestrial peoples.

The endless diversity which so outstanding a universe can present will only be endured by minds established in the calmness of universal consciousness. In the coming decades, centuries and millennia, it will be increasingly realized that the success of humanity’s existence will be dependent on the development of consciousness more than on any outward progress.

It is for these reasons that I state that the reality of man and the reality of other extraterrestrial peoples are one. Viewed with the eye of differences, we are diverse and unrelated, but viewed with the eye of oneness, we are more alike than dissimilar, more kindred than alien. And so it is that we must look to our inner reality to find not only our oneness with our fellow humans, but our oneness with other intelligent life in the universe as well. While ephemeral differences may confound us, our essential oneness in consciousness will never fail us.

For there is one universe inhabited by one people, and we are they.

Grass Roots with a Marketing Plan: A Conversation on the Founding of The Edge with Gary Beckman

Proud to be on the Edge

Living on The Edge

The Edge: Part of My Destiny

Blessed with Grace through The Edge

Reflections on The Edge

Video: Reflection on The Edge

The Return of the Teachers: An interview with Benjamin Creme

“Edge Inner View” hosted by Cathryn Taylor Second Wednesday of each month at 3:00 p.m. Central — Join Cathryn as she interviews a member of our holistic community. To listen, call 714.364.4750 at show time[...]
View Calendar
© Copyright © 2020 - The Edge Magazine. All Articles Copyrighted by each author.