Picture Jack Canfield, the charismatic co-author of the Chicken Soup For the Soul book series and “America’s #1 Success Coach,” vroom-vrooming through the cosmos on a solid gold Harley… accompanied by a Gang of spiritual soul mates. Then… picture yourself joining the Gang. It’s hard not to smile, or at least raise an eyebrow.

But it’s more than just a whimsical image. It’s the inspiration for Canfield’s new book, a mostly factual, adventure-filled account of his personal spiritual journey and subsequent awakening to his life’s purpose.

Partnering with fellow Gang members such as William Gladstone and Barbara Marx Hubbard, Canfield uses the book to set the stage for the ride of a lifetime — the one we’re all invited to participate in, the one that ushers in a new age of global consciousness and Universal Humanity.

Your new book, The Golden Motorcycle Gang, is set to release this month. What inspired you to write this book at this time?
Jack Canfield: When I was in graduate school at the University of Massachusetts, we had a guest lecturer who led us through a guided visualization to take us back to when we had chosen to become a teacher. Well, I went back to before I was born, which kind of shocked me. And [in the visualization] there were a bunch of us, “souls” I guess, on summer vacation, floating through the universe and having a good time driving down the road on Harley Davidsons. (That’s where the book title comes from.) We looked down on Earth and there was a war going on. It was 1944, which is the year I was born, and I just had this sense that I had to go down and help.
So I chose to be born and help out, and that’s been my life’s work.

Afterwards I thought, wow, I’m not just a school teacher; I’m a teacher at a higher level and I have a bigger destiny to fulfill. Then I kind of forgot about it until 10-15 years later when I started meeting people that I had this certain vibrational resonance with. I realized they were doing the same work I was doing; they were here with that same purpose. Maybe they’re part of that “Golden Motorcycle Gang” and we’re reconnecting, I thought.

I was having a beer one night with Bill Gladstone, a literary agent (and the co-author of the book) maybe 10 years ago, and I told that story to him.

And I said, “That’s ridiculous, no one wants to hear that,” but he kept hounding me. Finally I said, “Bill, I just don’t have time.”

“What if I were to interview you two hours every day for a week or two,” he says, “and get all the stories. Then I’ll do the first draft and you can clean it up and make sure it’s accurate, fix the writing, or whatever.”

That’s how the book came into being. 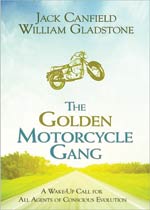 The image of spiritual beings belonging to a motorcycle gang makes me grin a little, but also piques my curiosity. Guides, angels, ascended masters and others are more often portrayed as introspective beings wearing long white robes. Why do you think you’re getting visions of a “hog” Heaven?”
JC: (laughing) I’ve never been drawn to a community where we all wear white and bow down to a certain guru. I’ve studied with many and I’ve sat at the feet of many, but there’s always been this sense of independence in me.

When 15 guys on Harleys go by wearing their Hell’s Angels jackets, I admire that sense of “we are who we are and we don’t care what you think about it.” Not that these are guys I’d necessarily want to go have a beer with, because I don’t really know how safe I’d feel! But that’s the kind of feeling I had during that visualization. We were just a bunch of men and women flying through space on motorcycles. They’re golden because it’s spiritual.

In the book, you had more than one encounter with other people who had seen that same image of being in a gang of motorcyclists. Why do you think that same metaphor keeps showing up?
JC: It’s hard to know what gets planted in consciousness. There’s a book by Dick Sutphen called, You Were Born Again to Be Together. In that book, he talks about groups of people who travel through time together like a family — it’s the idea that certain souls agree to go through eternity together and have different experiences. I think people in my “tribe” if you will, saw similar images. But I don’t know why.

It seems like there are many people who have had transformative spiritual experiences of one type or another, but are hesitant to talk about it. Have you noticed this?
JC: I see it all the time. When I do my groups, we talk about these things and people come out of the woodwork. I see bank presidents, corporate leaders, military people and policemen who’ve had near-death experiences, visitations from angels, intercessions from higher powers and awakenings. But they’re afraid to talk about it because they don’t want to be seen as “woo woo.”

But someone has to go first. A lot of people don’t know this side of me. I think I’m seen as kind of a famous person because of the Chicken Soup for the Soul books. Now they can see, here’s this normal guy who’s had these experiences. Maybe it will give them the courage to admit they have too.

You founded the Transformational Leadership Council; its members are listed in the book. What is the purpose of this group and how has it influenced change?
JC: It was founded out of my need to have a support group of people doing similar work. There were different associations, but there was no group for people who own transformational training companies. So I threw a three-day event at my house, and for three days we had a discussion about whether or not we wanted to create a support group with each other. Well, 32 people were invited; 30 came; 29 people said yes. Now we’re at about 125 members. It’s morphed into also including transformational coaching company owners, transformational authors that we all read, transformational media people, and so on. The purpose is simply to support each other in becoming more conscious and sharing our techniques with each other.

Did you feel like the 30 people in this original group were part of the Golden Motorcycle Gang?
JC: I would say that 80 percent of them were. Yeah, I could feel that vibration.

How do we know if we belong to The Gang?
JC: If you feel you have a calling, a destiny to contribute to the transformation of the world into a more cooperative, loving, positive, socially just, environmentally sustainable, spiritually fulfilling world, you’re probably part of the Golden Motorcycle Gang. I might have been in one “local chapter,” but it’s clear to me that there are more members than me and the little group I hang out with. I meet people who are locally well known but not on the national scene and I say, yeah, you’re part of the gang. I think it’s become a metaphor for anyone who wants to become a midwife to the evolution that wants to be occurring right now.

What does this evolution look like to you?
JC: What I get is that there’s something bigger than us that’s evolving. We can tune into it through meditation, visualization, and so on. If you tune into it, you can cooperate with it and you do your part.

I think that so many people who are out there doing counseling, coaching, teaching meditation, doing yoga classes, NLP, EFT… are doing this work. Some people are very conscious about it because they’ve tapped into that calling, that awakening. Other people are more unconsciously doing it, but it’s a quickening I see all over the planet.

In the book, Barbara Marx Hubbard presents you with five questions we can all ask ourselves to determine whether or not we’re part of the Golden Motorcycle Gang. Can you share those with us?
JC: Barbara had an experience [during a full-life regression] of going to the Elysian Fields where in Greek mythology the Gods and demigods hung out. There she found Aristotle and Plato and people like that (probably in white robes!) and was asked these five questions:

Can you talk a little about the Birth 2012 event on Dec. 22 that you’re helping to organize: how you plan to participate, how the rest of us can also take part?
JC: There are a lot of events being created and maybe I’ll be on a stage somewhere, but I will definitely be participating. Through the Transformational Leadership Council, we have a combined mailing list of over 12 million people and we’ll be promoting it, encouraging people to really participate in a day of celebration, a day of intention, a day of how do we want to create this next chapter of our life? That day will be an ongoing day of celebrations and concerts and TV shows and such. Conscious evolution means evolution by choice, not chance.

For more information on The Golden Motorcycle Gang or Birth 2012, visit www.GoldenMotorcycleGang.com and www.Birth2012.com.

The Topography of Rage

Helping Minds Through the Empath