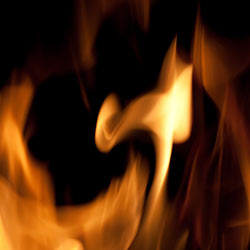 NOT LONG AGO I burned myself. My resulting epiphany so excited me that I dashed around the mental health clinic where I was working, trying to share my discovery with fellow clinicians and even two patients. But bewildered and apprehensive expressions betrayed their suspicion that I was nuts.

After pouring boiling water from a kettle into my tea cup, I was returning to my office when I accidentally jostled the cup and the liquid splashed upon the back of my hand. Burning like hell, a sharply demarcated area of that hand reddened and swelled. I assumed that I had a second-degree burn in progress. But I recalled what I had heard about some Chinese restaurant cooks: after burning their hand with boiling oil, they immediately obliterate the incipient burn by placing the affected hand as close to the flame of a stove burner as possible without singeing themselves. Reportedly, the pain immediately worsens but then vanishes, the burn along with it.

These reports had intrigued me for they violated our assumption that the best immediate intervention for a burn is exposure to cold water, the colder the better. And I was already aware of equivalent paradoxes for other problems in first aid and health care. And so I hastened to the nearest bathroom sink and plunged my hand under a running stream of hot water. The pain of course intensified and remained worse for maybe 30 seconds. But then it lessened. And when I withdrew my hand from the water after another minute or two I was amazed. There was no pain! Not only that, but except for a tiny triangular red patch of several millimeters near the base of my thumb, there was no redness, no evidence of a burn whatsoever. That tiny patch of red disappeared by the end of the day.

In the coin of Thomas Kuhn’s terminology, this occurrence represented an anomaly violating our customary paradigm of thought and practice. Instead of combating the problem with its exact opposite (cold water), I exposed it to more of the same. I applied heat, ostensibly the worst possible treatment for a burn, which is a product of excessive heat. However, anomalous though my behavior and the outcome would seem, the efficacy of this contrarian treatment was not an isolated phenomenon.

My bizarre burn cure reminded me of other ostensibly irrational treatments. For instance, how many know that a remarkably effective home remedy for heartburn is vinegar (raw organic apple cider vinegar, to be precise, about 1 tsp diluted in water and mixed, if you prefer, with a little honey)? Odd, for vinegar is acetic acid, scarcely a substance designed to soothe gastric acidity, right? (By the way, I first learned of this phenomenon from one of my patients. Thank you, Krista.)

Or that rubbing frostbitten skin with snow (not ice) is safer and more effective than using heat on the injured region? Actually, Samuel Hahnemann, an 18th century physician and the founder of homeopathy, recommended frozen sauerkraut (he was German, after all), which is perfect if you are eating hot dogs at a Green Bay Packers game without mittens.

And what about the reliable efficacy of hot soaks for inflammations of the skin or soft tissues just beneath the skin (e.g. boils), characterized as are all inflammations by heat and redness? And the well-known proclivity of spicy foods to cool off hot people by increasing their perspiration? (It is the evaporation of the sweat that produces the cooling.) Here again, in both situations, heat seems to diminish, not aggravate heat.

And why, come to think of it, does scratching soothe itching? Itching, after all, stems from a stimulation of pain receptors in the skin. Shouldn’t more stimulation (scratching) produce more, not less itching?

And while we’re on the subject of counterintuitive home remedies, though this one also involves interpersonal dynamics, an experiment I performed with my son amazed him. He was sneezing sporadically and when I noticed that he was about to sneeze again, I yelled “Atchoo!” and his urge to sneeze suddenly vanished. I had, in effect, sneezed for him.

The Ironic Health Benefits of Allowing All Foods (Yes, Even Processed Foods)

How to Establish a Solid Morning Routine to Eliminate Stress

Finally Free: Healing from the Wounds of Trauma

How to Get Unstuck: Your Helping Hand at the End of Your W-R-I-S-T

How to Adjust Your Mindset to Achieve Positive Change