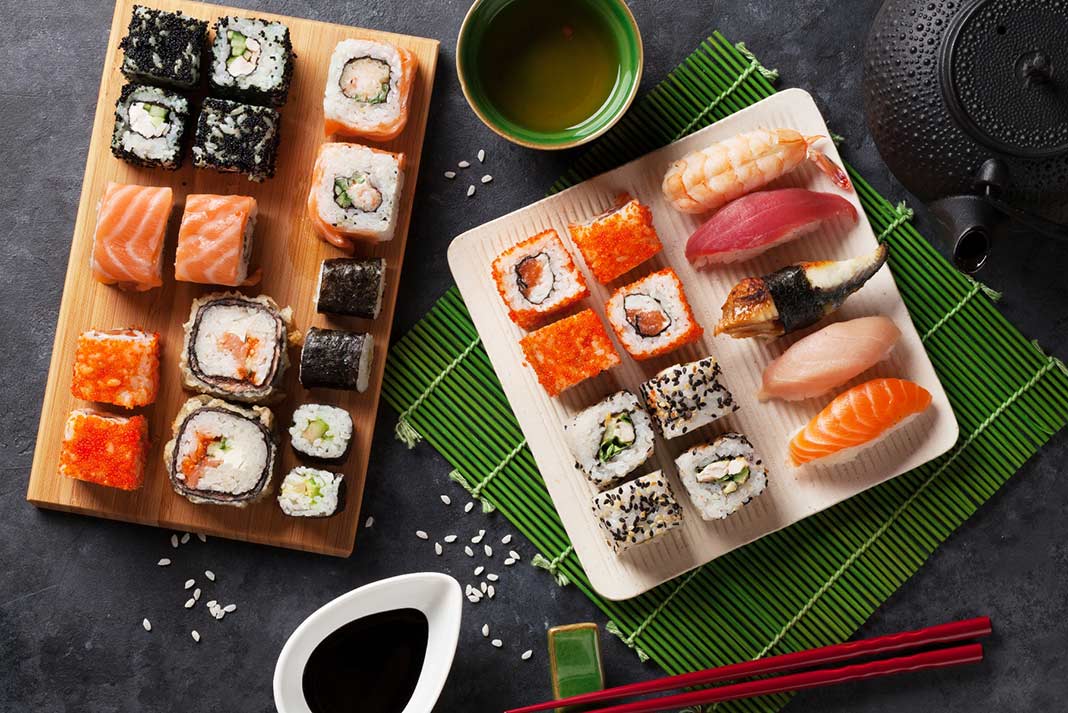 All we hear about these days is how healthy the Japanese are and how they live longer than anyone else in the world. The women apparently don’t get menopause symptoms, and they’ve never even heard of hot flashes until Western researchers turned up and asked about them. They reportedly suffer from less cancer, osteoporosis, dementia and heart disease than others.

Look at the Japanese diet and you’ll find out it’s raw fish and lots of veggies — and don’t forget the seaweed, the rice and the soya. No spuds, nothing processed. Feel miserable already? Rather have hot flashes followed by osteoporosis and an early death perhaps?

Or is there a way we could literally have our (Japanese) cake and eat it.

Because here’s the big thing, here in the West: we never used to get hot flashes before the industrial revolution either. The word menopause was invented in 1821. So what were we doing before then that was helping us? It was certainly not eating soya — although if you look at some marketing, you would think that it was. They tell us that soya contains plant hormones and they make it seem that there’s no other way you can get them. In reality, over 300 foods contain plant hormones and most beans, peas and legumes contain high amounts.

Once you know that, it’s easy to see that we had our own cultural traditions that gave us lots of plant hormones. So pease pudding anyone? Lentils and hock? Mushy peas with your fish and chips? These are all old-fashioned dishes that are rich in plant estrogen. Apart from baked beans on toast, they have been largely forgotten.

Yet, it’s easy to start adding portions of beans and peas to whatever else you are eating. Plus, there are lots of modern ways to get plant hormones into your diet. You might be eating them already, from supplements that you buy in at the drug store to help menopause symptoms or osteoporosis. If you look closely at them, many of them contain red clover. This has been used for generations for menopause symptoms, long before there were drugs and supplements. And here’s the exciting thing: you can sprout it on your windowsill in just a week without soil. All you have to do is water the seeds and they will grow into a little double-leaf plants that you can harvest.

Red clover is not the only thing you can have sprouting away on your windowsill. Mung beans also are packed with plant hormones and are even easier to grow, as you only need to get them to the root stage, which takes two to three days.

You might think sprouting is the preserve of beardy weirdys and Birkenstock wearers. But not so. We have been sprouting in Europe for thousands of years. The moment records began, it is there. You probably grew good old-fashioned mustard and cress when you were a kid. We have been sprouting it for centuries and it’s always been known as a health food, curing everything from arthritis to scurvy. The Victorians called it their “Ginseng.”

What they didn’t know was that it was full of both vitamin C (more than lemons even), plant hormones and cancer-fighting chemicals known as glucosonolates. Modern science is now showing us this, but sadly barely anyone is growing it anymore and the stuff sold in most supermarkets as “salad cress” is mainly rape seed with a small amount of cress so they can legally call it that.

Another reason the Japanese diet is so good is that on top of the fish, seaweed and vegetables, they are into sprouting, too. They love sprinkling alfalfa sprouts on many of their dishes, mung beans are a staple and they put sweet red aduki beans in their cakes. This will give them a plant hormone top up. Not just that, but sprouted foods are packed with other nutrients and interesting plant compounds, sometimes containing 90 percent more than the full-grown plant. This means you can eat small amounts to get big benefits — and it’s a great way to get the Japanese diet effect without going on the Japanese diet. Of course, I want you to eat as healthy as possible but on days that it’s difficult, sprouting can take up the slack.

If you’re wondering why people haven’t thought of this before, perhaps it’s because having a tray of beans and greens growing on the windowsill doesn’t fit into our fast-paced, ready made world. However, it only takes a couple of minutes a day to water your sprouts; it’s easier than starting a vegetable garden or deciding to bake your own bread, and it can be a little corner of your life that is all natural, all home grown — something you are doing for yourself and your own health.

So, you don’t have to go on the Japanese diet to have a healthy menopause. And by the way, the Japanese diet increases the risk of strokes, which is another reason to do things our own way. We can look to our traditional diet plus turn to modern ways of sprouting ancient foods, and grow our own plant hormones the way nature intended.

How to Free Yourself by Saying No

Suggestions for Home Management of Covid-19

You’re a QUACK!: Where has Natural Medicine been this whole pandemic?

The Ironic Health Benefits of Allowing All Foods (Yes, Even Processed Foods)

How to Establish a Solid Morning Routine to Eliminate Stress

Finally Free: Healing from the Wounds of Trauma

How to Get Unstuck: Your Helping Hand at the End of Your W-R-I-S-T

© Copyright 2022 - The Edge Magazine. Each article copyrighted by author.